Houston car accident injury attorneys have watched along with other Houston residents the raging Riley Road fire and the devastating effects the blaze has had on several communities and thousands of residents. The fire has been burning for over a week and evacuation orders for residents in Grimes, Montgomery and Walker counties were finally being lifted, allowing families and residents back to their homes. 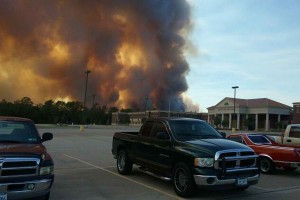 As of today, Tuesday morning, the Riley Road Fire burned nearly 19,000 acres in the three counties, and demolished at least 60 homes. Many roads were shut down, and thousands of residents evacuated to try to help protect the residents from the spreading fire, and from potential motor vehicle accidents. Many roads were closed to prevent residents from trying to get back to their homes while it was still dangerous, but also to slow the flow of traffic during this anxiety-provoking situation.

Houston car accident lawyers know that during an emergency situation or especially stressful time, drivers do not always make the best decisions while driving so it is best to stay off the road if you are under any sort of emotional trauma. The Riley Road fire has been emotionally devastating and difficult for many of the area residents, and despite the roads being closed because of the fire damage, it turns out to be a good thing for all area residents. So far there have been no accidents reported as a result of the Riley Road fire, which is a relief. Following is a list of some of the roads that are starting to be opened, and a few that remain closed due to the work still to be done to fully contain the fire.

Crown Ranch residents were allowed to return to their homes, too, but they must enter on FM 1486 from Jackson Road. FM 1774 and FM 1486 reopened at noon Monday.

FM 1486 was open to residents only and identification is required to access the neighborhoods. Officials said returning residents should remain cautious and remember the burned areas can contain hazards, including falling tree limbs and decreased visibility on the road.

In Waller County, as of 8 a.m. Tuesday, FM 1488 is open to all through-traffic. All cross roads and side roads north and south of 1488 are still closed.

If you or someone you know has been injured in a motor vehicle accident, call Houston car accident lawyer, Joe Stephens today at 281-623-1701 for a free consultation. Joe Stephens is a Houston injury attorney that has been helping Houston and South Texas residents for over over 30 years, and will expertly handle your case as well. You may also fill out a contact form online and a member of The Stephens Law Firm staff will contact you within 24 hours to schedule your free consultation. Call Joe Stephens today to get the help and advice that you need.