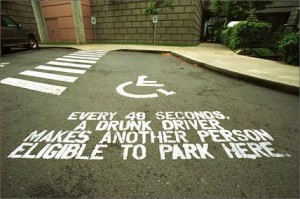 All too often, we see the white crosses next to the road dedicated to the memory of a person killed by a drunk driver. We hear something every day on the news about another innocent person killed by a drunk driver. Nevertheless, it really doesn’t seem to sink in. The last case I tried, about 50 people sat on the jury panel, and a surprising number of folks were willing to excuse a person who chose to drive, instead of doing something safer such as using a designated driver, or calling a taxi cab. The Judge cut about 20 people from the jury panel on this issue who simply did not have a problem with making the drunk driver follow common sense safety rules such as these. In my line of work as a Houston vehicle collision injury attorney, I am constantly interviewing folks who have had their lives turned upside down by a drunk driver. Or worse, a family that is suffering because a loved one was killed. Here are some sobering facts on drunk driving.

You may be surprised that drunk driving has been on a steady decline for the last ten years, yet intoxicated drivers still contribute to over a third of deadly car accidents every year. In fact, there is almost a 60% chance that you will fall victim to a drunk driver sometime in your life. That is what the statistics show, and that is about what proved to be true with my last jury panel. But how are you to protect yourself against the reckless behavior of an intoxicated driver? Among other things, I believe you need to get off the road as soon as you can after dark. The number of drunks on the road rises dramatically between the hours of 11 p.m. and 2 a.m. If you have had a few drinks, don’t drive, even if you are not drunk. Even a few drinks reduces your awareness of hazardous drivers, and decreases your ability to react to a drunk. Finally, if you or someone you know has been affected by a drunk driver, please hire a good lawyer who is willing to try your/her case. The drunken driver is likely to change his behavior if the consequences are severe enough. A good trial lawyer has the ability to “hang a big judgment” on a drunk driver, and this will affect this wrongdoer where it hurts the most. The pocketbook.

Pile Up on Sam Houston Parkway leaves 1 Fatality in Houston